The big worry for most people thinking about buying an electric car is how to charge the thing.

But the real question you should be asking is how you’re going to refuel your petrol or diesel vehicle if you don’t go electric.

That’s because electric cars are going to send the petrol station business into a death spiral over the next two decades, making electric vehicles the default option for all car owners.

Why? Because charging electric vehicles is going to become much more straightforward than refuelling petrol and diesel cars.

This isn’t just because the government has banned the sale of new petrol and diesel cars from 2030.

Imagine we were going the other way, replacing electric cars with fossil fuel power.

You are writing the risk assessment for a new petrol station. You want to dig a big hole in the ground in the middle of town, put in some tanks and fill them up with an enormous amount of highly flammable fuel.

Then you’re proposing to attach a really powerful pump and invite in random members of the public.

They’ll arrive in vehicles with hot engines. You’ll hand them the really powerful pump that sprays the highly flammable liquid.

Without any supervision they’ll use it to transfer large quantities of the highly flammable liquid into their hot vehicle, they’ll pay you and drive off. 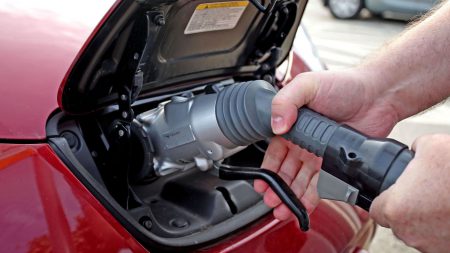 Are you OK to sign off on that? Do you think Health and Safety will give it the green light?

My point is that fuelling cars with petrol and diesel is dangerous, which is why we do it at specially-designed centralised refuelling points.

Ubiquitous power
Electricity, by contrast, is pretty much everywhere already. Where’s your car now? Do you think it might be near an electricity cable? Exactly.

The only challenge is how to bring that electricity a few feet to the surface so you can start getting it into your battery.

And you don’t need to be Thomas Edison to work that out.

If you live in a flat or a house without a drive, don’t worry. The aim is to have an electric vehicle (EV) charging point at virtually every parking place.

Erik Fairbairn’s electric vehicle recharging company, Pod Point, wants to be part of this effort to rewire the UK.

“You’ll get to a point where you barely ever think about energy flowing into your car again,” he predicts.

Of course, we’re a long way from that utopia, and that should be no surprise.

We’re just at the beginning of the electric revolution: just 7% of new cars are electric and they make up a tiny fraction of vehicles on the road, so there isn’t a huge market.

But, as I argued in my previous piece, change is coming fast and investment in charging infrastructure is coming with it.

There will be good profits to be made when millions of us want to recharge, just as there was a boom in petrol station construction at the dawn of the age of the car a century ago.