When it took its initial stake in the network, GRIDSERVE announced it would be replacing all existing Electric Highway chargers, as the existing infrastructure had become outdated in the decade since it was created. In fact, it was ranked the worst public charging network in a survey of Zap-Map users in January, with common complaints including that the chargers are old, poorly maintained and frequently out of service.

GRIDSERVE said it is “ramping up investment” in the network through the replacement works, with the new chargers to feature all the latest advances including contactless payment. Indeed, last month the first high-power charging facility was opened at Moto’s Motorway services at Rugby, with this site featuring 12 350kW chargers.

Speaking to Current± following the initial replacement works being announced, Toddington Harper, CEO of GRIDSERVE, said the company was “moving heaven and earth as fast as possible to get new chargers in place in hopefully every location”. 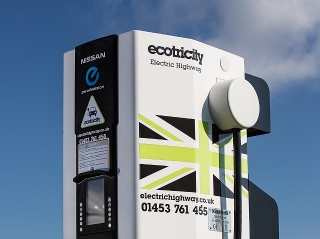 Having now completely handed the network off to GRIDSERVE – who Ecotricity founder Dale Vince described as the “ideal company to hand the baton to” as the network needs an owner with “access to serious funding” – Ecotricity is now able to focus on its core green energy business, with plans to bring forward a series of solar and battery storage projects to be built without government support.

“We’ve reached an interesting point in the electric car revolution, exponential growth is just around the corner, the technology for charging has evolved with one standard and an incredible rate of charging now being possible – using an electric car is almost on a par with using a fossil powered car, where you can just top up once every week or two,” Vince added.

It is also looking to expand its Sky Mining facility, a world first carbon capture and storage process that turns atmospheric carbon dioxide into diamonds.