EV charging infrastructure in London is to undergo a major expansion, including five flagship charging hubs, in a bid for zero emission transport by 2030.

The Mayor of London, Sadiq Khan, has laid out plans for an ‘electric revolution’ of London’s transport in line with ambitions for the capital to be one of the world’s leading zero-emission cities.

Five flagship charging hubs are to be introduced, the first of which will be operational in Square Mile by the end of 2019.

A ‘one-stop-shop’ for Londoners to request new charging infrastructure from local authorities will also be led by London councils, with the aim of making the switch to EVs easier. 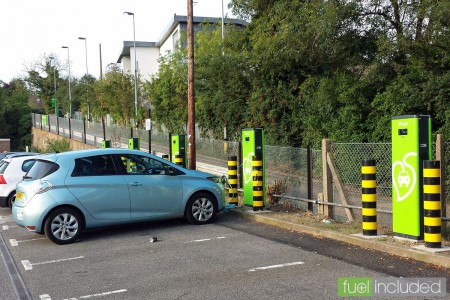 Fast charging at one of the dozen rapid chargers at Stanmore – before they were removed (Image: T. Larkum)

Next generation ultra-rapid charging points are to be installed at London petrol stations later in the year, with 300 rapid chargers to be installed by the end of next year. There will also be a focus on expanding car clubs and bringing more vehicles to the market.

A new electric van, based on the electric black cab, has also been unveiled by the London Electric Vehicle Company, going on sale next year.

Sir John Armitt, chair of the National Infrastructure Commission, said whilst launch of the van and rapid chargers highlights the importance of EVs in improving air quality and reducing the impact of the growth in urban freight, the government should commit to a national rapid charging network.

“More action will needed– such as the ban on new diesel HGV sales by 2040 we recommended in our recent report on freight and reinforcing the electricity network – if we’re to meet the UK’s climate change targets and clean up the air in London and other cities,” Armitt added.