The new Fiat 500 is a superb all-electric city car, and one that should be at the top of your shortlist if you’re in the market for a stylish and immensely capable small EV. The 500 retains all of its familiar Italian flair, and is now even more appealing with updated on-board tech along with a practical real-world range that leaves close rivals lagging behind.

Verdict
Throw in the government’s plug-in car grant incentive and the new 500 offers tremendous value for money. It’s among the best small electric cars currently on sale, and one we can wholeheartedly recommend.

About the new Fiat 500
At first glance, you might think not much has changed with the new Fiat 500 compared to the previous model. Well, you’d only be half right, because although the famous Nuova 500 profile is still easily recognisable, the latest third-generation car has switched to all-electric power.

The new 500 is slightly longer, wider and taller than the previous model, which remains on sale in petrol/mild-hybrid form, and has been developed using an all-new platform, so there are no compromises on valuable interior space which is an issue that can sometimes occur with modified combustion-engined models.

There are arguably only two rivals that are in direct competition with the all-electric 500: the classy MINI Electric will tempt some, while the retro Honda e really stands out from the crowd with its funky styling. Other options that buyers might consider include the PSA Group’s Peugeot e-208 and Vauxhall Corsa-e, although both perhaps lack the necessary kerb appeal to seal the deal, while the extra practicality of the Renault Zoe is still a compelling choice – even after eight years on sale.

Power for the 500 comes from either a 117bhp or a 94bhp motor, with the former using a 42kWh battery which Fiat calls ‘Long Range’ and the latter a 24kWh ‘City Range’ version. With a claimed maximum of 115 miles from a single charge, the City Range option is suitably named, and you probably won’t be relishing many longer journeys in the cheapest 500. But, upgrading to the bigger battery means you’ll benefit from up to 199 miles (WLTP rated) before you need to stop at a charging point. 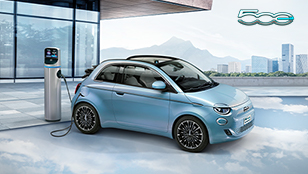 Fiat offers three core equipment levels for the 500: Action, Passion and top-spec Icon, while a limited La Prima edition is also available. The entry Action specification is paired with the 94bhp motor, with all other trims are coupled with the 117bhp Long Range set-up.

Engines, performance and drive
The Fiat 500 was always a good city car, but it’s been made even better by the adoption of electric power. Key to this improvement is how well Fiat has engineered the 500 to make it such an effortless and uncomplicated car to drive – particularly at slower speeds. One-pedal driving is possible if you choose the right drive mode, helping to take some of the strain of navigating through busy urban streets, while the 500’s drivetrain is reassuringly smooth and quiet on the move.

Refinement is decent for such a small car, although we’d avoid the bigger 17-inch alloy wheels as they create too much fidgeting over the lumps and bumps of typical UK tarmac. The 500 has the ability to take on motorway driving without feeling overly strained, while the only real niggle is the light steering at speed and a slight deadzone through the centre which increases the inputs having to be made.

Fiat has made the on-board tech a real highlight, with the 500 being the first car in its class to feature Level 2 autonomous driving. This means the car is able to adjust acceleration and braking, while also ensuring it remains within the designated lane, although the driver has to be ready to resume control at any time.

Engines, 0-60 acceleration and top speed
The entry 94bhp 500 version achieves 0-62mph in 9.5 seconds, with a top speed of 84mph. It’s probably worth remembering that this is the ‘City Range’ option, so you probably won’t spend too much time exploring the top end of the speedo dial. Instead, it’s good to know that, with a healthy 220Nm of torque and the typical instant drive associated with all-electric cars, the base 500 is more than capable of keeping up with traffic in and around town.

Moving up to the 117bhp car brings a half-second advantage to 62mph and a 93mph maximum.

Range, charging and running costs
Fiat offers the 93bhp Action version as an entry point to the 500 range, although it comes with a smaller 24kWh ‘City Range’ battery and offers a claimed 115-mile range. You’re probably looking at nearer 100 miles in real world conditions, so you’ll have to work out if it suits your lifestyle, or whether you’d rather stump up an extra £3,500 for the more practical 117bhp mid-range Passion version with a 42kWh ‘Long Range’ set-up and up to 199 miles from a single charge.

During our own test with a Long Range car we saw an estimated 168-mile range from a full charge with the Normal driving mode engaged, however this figure climbed a little when switching to the more efficient Range mode and rose to over 180 miles using the Sherpa setting, which reduces the maximum available power and limits top speed to 50mph.