Nissan has partnered with the famous Mackies of Scotland to create a rather sweet concept vehicle.

The electric vehicle pioneers and the ice cream brand have collaborated to create an all-electric ice cream van for “Clean Air Day” in the U.K. on June 20th, which demonstrates how a “Sky to Scoop” approach can remove carbon dependence at every stage of “the ice cream journey.” 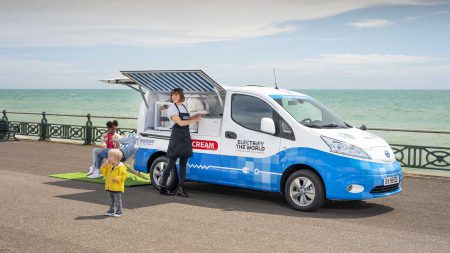 Going green is nothing new for Mackies, which powers its family-owned dairy farm by renewable wind and solar energy, but most ice cream vans across Britain are powered by diesel engines which stay running even when the van is stopped to power the fridges and freezers onboard.

In fact, some U.K. towns and cities are even looking to ban ice cream vans – which is a preposterous thought, even for someone like me who can’t eat ice cream. Nissan’s new concept provides something of a solution to the impending doom of the good old ice cream van, reducing its carbon footprint while keeping kids happy and parents predictably out of pocket.