ULTRA-FAST electric car charging forecourts will roll-out across the UK this year with the start of a billion-pound project to build 100 solar-powered sites.

The first of more than 100 solar-powered forecourts to be built in the UK have been announced. Commercial vehicles will be able to recharge within 30 minutes at forecourts equipped with next-generation solar panels. While some smaller cars with high-speed charging can be fully topped up in just ten minutes. Gridserve, the British firm behind the billion pound project imagines their forecourts will eventually replace traditional petrol stations. 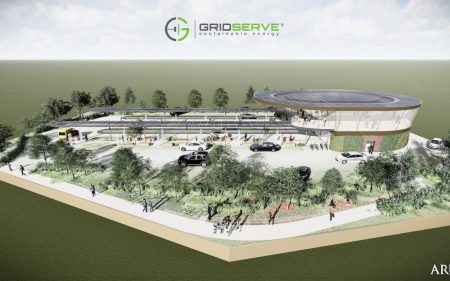 The first solar powered forecourt will be built in Braintree, Essex and Gridserve has already confirmed more than 80 sites will be built – with even more are in the pipeline.

“Airport-style” lounges will be built as part of the £1 billion ($1.31 billion) project, to offer commuters shops, and facilities as they wait for their cars to recharge.

Construction at sites in Hull and York are also expected to start before the end of the year.