THE all-new LEVC electric van is based on the LEVC London cab which has 80-miles of zero-emissions range and a 377-range-extender hybrid.

The makers of the new electric London cab has now developed a new van which could be a game changer in cities. LEVC’s new commercial vehicle is a zero-emissions light van which is similar to a Ford Transit in size. It was unveiled by London Mayor Sadiq Khan and LEVC CEO Joerg Hofmann at the Institution of Engineering and Technology. The vehicle is based on the same architecture and proven e-City range extender technology as LEVC’s TX taxi, of which there are now just under 2,000 on the roads.

It has an all-electric range of 80-miles, making it suitable for city drivers and with a range extender petrol engine it has a total range of 377-miles. 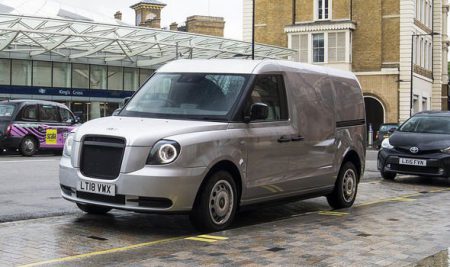 Therefore it is essentially a plug-in hybrid but achieves more pure electric range than a typical hybrid.

The vehicle will allow the driver to avoid any city driving charges and reduce the amount spent on fuel over time.