Final i4 shown at Goodwood ahead of a market launch three months early, in line with BMW’s accelerated EV plans

BMW has revealed the final, production-spec version of its new i4 saloon to the UK public for the first time at this year’s Goodwood festival of speed, as it gears up to launch the Tesla Model 3 rival three months ahead of schedule.

“The decision to launch three months early was easy,” according to CEO Oliver Zipse, who outlined how BMW is “picking up the pace” with respect to the electrification of its line-up. Full specifications will be announced in the coming weeks.

The i4 will go on sale alongside the i3 electric hatchback, new iX3 mid-sized SUV and iX flagship in BMW’s expanding electric line-up. By 2023, the firm will have 12 pure EVs on sale worldwide, with an electric option available in 90% of its current market segments. 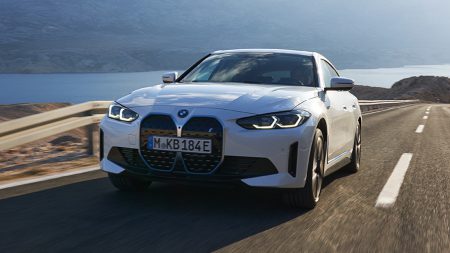 The i4’s production-spec debut comes as BMW unveils a plan to radically overhaul its approach to electric car development from 2025.

The ‘Neue Klasse’ transformation process will see the firm usher in a radically new design approach and place a heightened emphasis on technology and software. A new modular powertrain family will also be introduced, as will more efficient battery technology and greater use of recycled materials in the production process.

The final i4 stays true to the design of last year’s production-previewing concept and is clearly visually related to the combustion-engined 4 Series that went on sale late last year. The upcoming 4 Series Gran Coupé will be largely identical to the exclusively four-door i4.

Precise technical specs remain under wraps, but we know the range-topping model – likely badged i4 M – will send up to 523bhp to both axles and offer a range of 367 miles. A 0-62mph time of around 4.0sec and top speed of more than 124mph are likely.