Our second go with VW’s upcoming EV leaves us convinced that electrification is the way forward.

It’s been a long time coming, but the 2021 Volkswagen ID 4 EV is nearly here. That is, nearly ready for patient buyers to actually take the things home and experience what VW can do when it makes up its mind to build an electric car from the ground up.

Don’t get me wrong, the VW e-Golf was great, but shoving a battery pack in a car designed around an engine and gasoline tank necessarily results in some substantial compromises. The ID 4’s MEB platform was designed for EVs like this, and as such offers far more range and a much better layout than the humble Golf.

How much more range? At 250 miles per the EPA, the ID 4 can go twice as far on a charge as the e-Golf. That’s despite having much more power (201 horsepower and 228 pound-feet of torque) and being bigger and roomier, too.

My colleague Steven Ewing already had a go in the American flavor of the ID 4, so I won’t rehash too many details, but suffice to say my impressions behind the wheel were very much the same. Despite all that power going to the rear axle, there’s very little that’s sporty about the ID 4. It accelerates briskly but not angrily and offers a comfortable, relaxed ride quality. It’s a very different thing from Volvo’s electric XC40 Recharge, which is surprisingly quick. 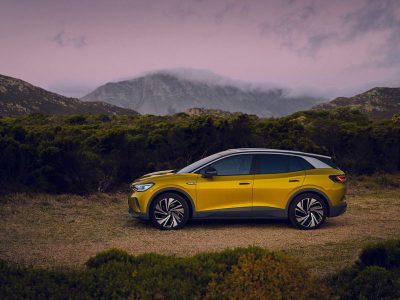 This observation is not a strike against the VW. Far from it. I really liked the chill feel of the ID 4, a vibe you pick up as soon as you get in the car. The stark, white of the steering wheel and other interior highlights present on this First Edition give the car a bright, modern aesthetic that’s more concept car than conventional cruiser. Even the act of driving away is free of drama. You just sit down, tilt the gauge-cluster-mounted shifter in the direction you want to go, and step on the accelerator.

The shifter is very much in the style of that found in another EV, BMW’s i3, which I adored. This style didn’t catch on back then, and I’d probably be letting optimism get the better of me to hope that it might do so now. Regardless, it’s far more intuitive than the push-button solutions showing up on more and more cars.

After you get where you’re going, just push a button to put the car into park (it clicks like a mouse when you do), get out, and walk away. The car powers itself down.

To find more fresh takes on everyday tasks, look no further than this VW’s HVAC system. Sure, you can do the usual zones and temperatures and defrost settings, but the ID 4 adds some smarts and personality with Smart Climate modes. Are your hands cold? There’s a mode for that, which turns on the steering wheel and directs warm air through the dashboard vents. Feet too hot? There’s a mode for that too, plus one called Fresh Air that quickly sucks in some ambient atmosphere — not something I sampled much on my chilly New Jersey drive, I confess.

Control freaks will surely want to dial in their own climate settings, which they can do, but I’ll be curious to see how well these modes strike their targeted scenarios when we get a chance to spend a little more quality time with the ID 4. I’m also curious to see whether Volkswagen can improve the responsiveness of the software the car is running, because right now, it’s all sorts of laggy. That’s not good given how many of the car’s systems are all handled via the center-mounted touchscreen.

Really, though, that’s the only fly in this ointment. The 2021 Volkswagen ID 4 is an impressive package. From the fresh look inside and out to the overall calm, relaxed aura of the thing, it left me smiling and wanting more. Hopefully that’s something we’ll all get soon.