The key data with a 1.6-litre petrol engine, a 44.5 kW electric motor and an 8.9 kWh battery make it clear that the drive train of the Kia Niro PHEV (or Hyundai Ioniq PHEV) is used in both compact PHEV models. The biggest difference: Since the two Ceed derivatives have a lower standard consumption, provisional measurements show a purely electrical range of up to 60 kilometres. 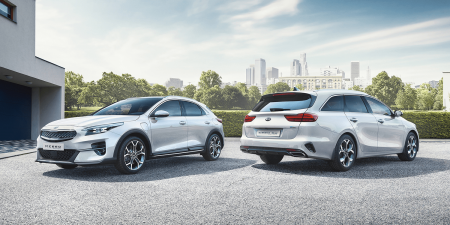 The combined fuel consumption is between 1.3 and 1.4 litres, with Kia predicting electricity consumption of 10.4-12.2 kWh/100 km (Ceed Sportwagon) and 10.5-12.2 kWh/100 km (XCeed) respectively. These are, however, values that were determined according to the WLTP but calculated back to the NEDC. Kia did not communicate the pure WLTP values. The same applies to the range.

The hybrid drive with its system output of 104 kW and a maximum torque of 265 Newton metres accelerates the Kombi Ceed Sportswagon to 100 km/h in 10.8 seconds and the XCeed to 11.0 seconds. The electric motor continues to sit between the petrol engine and the six-speed dual-clutch gearbox.