Utilities, automakers and big oil companies will drive the deployment of electric vehicle charging infrastructure, according to a new report by EY, which warns that despite market uncertainty, investment needs to be made or “it’s highly likely they’ll be late to the party”.

‘Driving the electric vehicle revolution’, released as part of the consultancy’s Renewable Energy Country Attractiveness Index (RECAI) publication, suggests that the key investors in the future of e-mobility have already been determined.

However, they face considerable uncertainty over how quickly EVs will displace traditional vehicles, and how what forms of charging will actually be required. Investment now could see heavy losses from low utilisation, or lead to stranded assets if the wrong charging infrastructure is deployed.

Much has been made of the split between home, workplace and destination, and public charging networks, with many in the UK sector expecting public charging to be the least utilisation option. 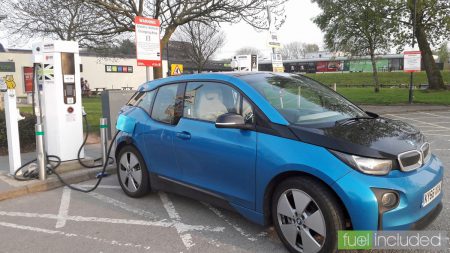 Our BMW i3 on charge at Corley Services (Image: T. Larkum)

However, those deploying such infrastructure have suggested that this will be needed to solve the issue of range anxiety for drivers concerned their EVs won’t make the distances required, while also being used to meet current driving behaviour which sees people ‘fill up’ at petrol station-like EV charging hubs.

According to Michael Cahill, management consultant at EY, the danger to any investors in this space will be in not acting soon enough to capture a portion of the market.

“If they don’t invest now, it’s highly likely they’ll be late to the party. But, equally, players might not want to risk investing too early and narrowly in a market where technology and policy is constantly developing,” he said.