People keep calling this car a ‘game changer’. It’s almost like some unspoken law, especially on Twitter. If you’re a car journalist and you’ve driven one, you have to tweet about it using the words ‘game changer’. I find this a bit strange. I mean, what game is it changing? Is it darts? Is it snooker? Can you move the balls with your hands now? Or is it, to be more accurate, the ‘game’ of ‘Jaguar selling electric cars’ in which case, yes, this is a game changer. It is also, if you want to stretch this to twanging length, the ball because before this car there was no game on account of there being nothing to play it with. So, erm… yea.

Like many cars, the I-Pace seems to be spec sensitive. There are some really attractive wheel options, up to a hearty 22 inches too, and a particularly nice blue paint, though it also seems to look good in dark grey and white. Unfortunately, this press car is in a different sort of grey, one that looks a bit flat and drab, like that colour you used to get on sporty Clios, and which in some lights appears British Leyland beige. It wouldn’t be my choice, especially not paired with the optional all-black alloys. I don’t like all-black alloys on a car. They’re like the all-black off-brand trainers worn by that weird kid at school who smelt a bit of TCP and once threw a rucksack at the maths teacher. There’s more spec madness inside this press demo where it teams stridently red leather with dark wood trimmings. Having played with the I-Pace configurator I know you can spec one up in a much nicer way, one that it doesn’t look like a car the factory cobbled together to use up whatever was left over, like the mad food you make the night before you go on holiday. Mmm, cheesy lamb chop with yoghurt. 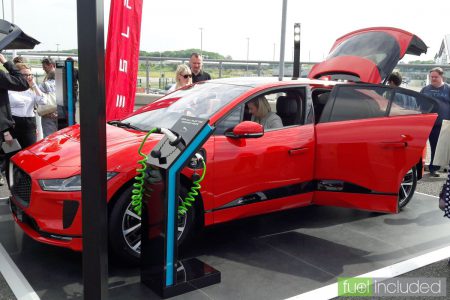 Aside from the colour/trim choices, there’s something else disturbing about this I-Pace and it’s a sort of strange gravelly noise. Normally electric cars are very quiet but there’s definitely an odd sound in the background. After a few minutes I realise it’s the sound synth which is meant to deputise for the missing internal combustion engine noise. A rummage through the touch screen menus finds the slider that controls it, and which is currently set to ‘dynamic’. There’s an un-named middle setting, and then ‘calm’ which is what I choose, immediately making the gravelly sound go away. I can see why they’ve done this, to bat away those people who say they don’t like electric cars because of the lack of engine sound, but I love electric cars because they’re so smooth and quiet and with the synth disabled the I-Pace is about as smooth and quiet as they come. Unless you’re reversing, then it beeps like a bin lorry.

Off to film a Smith & Sniff episode with this car (coming soon guys, don’t forget to like and subscribe!!11!!! etc). The first thing this involves is getting out of London. At some lights on a dual carriageway I come up behind a bloke in a Huracan Spyder. When the lights turn green he makes an energetic getaway and I take a small slice of delight in hanging on to his arse until the next set of lights. I’m sure if he’d really clogged it he could have got away, but the I-Pace wouldn’t have made it easy for him. It’s a plenty brisk car. The next part of my journey is a short trip up the A1 during which the I-Pace proves itself to be an excellent motorway cruiser. In a way a bit too excellent because it feels like it’s straining at the lead and will happily sit at a speed that is more than the speed limit causing the range-o-meter to drop at more than a mile per mile, wasting precious electricity. In the end, I stick the cruise control on to stop myself constantly going a little faster or becoming unable to resist the temptation to surge commandingly past some dickwit in a 320d. Instant access to a deep well of torque, 513 lb ft of it if you’re interested, is a wonderful thing.