Honda’s electric supermini has its charms, but what’s it like to live with? Let’s find out

Why we ran it: To see if the E has the everyday usability to match its desirability, despite its relatively short range

Life with a Honda E: month 5
Our time is up with Honda’s eye- catching electric city car. So how has it fared in our hands? Let’s find out – 7 April 2021

The world is quite divisive, you may have noticed. Debates are fierce, and the grey middle ground seems lost in a desire to make everything black or white. Whatever happened to a bit of good old-fashioned fence-sitting?

With that in mind, comments about the Honda E tend to go something like this: “Yeah, I love the way it looks inside and out, even more so the way it drives, but its range is tiny, so it’s basically rubbish.” Sure, the range figure is smaller than similarly priced rivals such as the Peugeot e-208, but by enough to discount the E entirely? Not a chance.

We’ll come back to the issue of range later. Yes, it’s part of the story of this car that started with us last summer, but it’s not the only part of it.

Our Crystal Blue metallic-coloured E came in the higher of two trim levels, Advance. This specification gets you not only an extra 17bhp for the single, rear-mounted electric motor, but also some extra comfort, convenience and safety features for a £2500 jump over the base car. For a premium product, it’s a price worth paying to experience the E in its very best light.

On first impressions, and even for the weeks and months that follow, the E will charm you with its exterior styling. This is a fine-looking, well-proportioned car that you never get tired of clapping eyes on – from a company whose styling department has a less than impressive past decade behind it. Indeed, the E looks like it’s from an altogether different manufacturer when it’s sat in a showroom with its Honda rangemates. But it’s a welcome reminder that the Japanese car maker still knows how to nail a timeless design, and it’s one that has never stopped turning the heads of passers-by during its time with us.

Those show-stopping looks make this not just another electric car but also the exact type of car to bring the EV debate to a more mainstream audience. Those conversations with strangers would so often start with a discussion on the looks, or the two side cameras that replace the door mirrors, but then talk would turn to general electric car ownership. Those conversations between curious strangers and real-world EV users give a far better impression of what it’s really like to live with an electric car than an internet search engine can ever hope to achieve.

Ah yes, those mirrors. What I at first thought was a bit of a gimmick actually turned out to be an incredibly useful feature. The ‘mirrors’ display just inside the A-pillars on a screen that extends across from the centre of the dash. The display is crisp, clear and perfectly sited, and the cameras give not only a slightly wider field of vision but also a clearer one that performs particularly well in low light. Quite what they do to the aero performance and therefore range is impossible to quantify in a test like this, but every little helps. 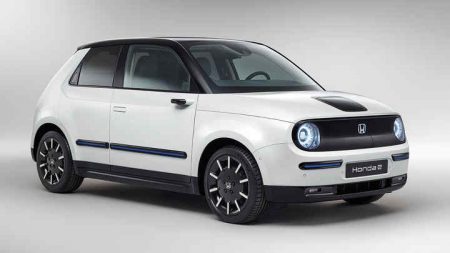 Bravo, too, to Honda for creating such a great interior. There’s a real sense of space and airiness, which comes from a combination of the light-coloured fabrics, large windscreen and even more so the absence of a centre tunnel between the front seats. It’s a really good use of space: with the rear bench up there’s enough room in the back for two adults for short journeys (although the boot is tiny like this), or drive it as I did for the most part with the bench folded flat and you have a spacious two-seater minivan with enough room for a large greyhound to sprawl out on her way to some daily mandated exercise (in the local area, of course).

Nippy off the line, adjustable regenerative braking allowing for true one-pedal use, runs out of puff a bit above 60mph… These attributes could apply to all manner of small EVs, but the E really stands out in other ways. Chief among them is its amazing turning circle, thanks to the rear-mounted motor and rear-wheel drive. Three-point turns have never really been the bane of my life, but I’m now sneaking round in one turn when before it would take three. It really is fantastic.

The E, then, is a car you desire when looking at it, when sitting in it and when driving it, and it comes with three or four killer features that make it excel as the most modern of city cars. If you do most of your miles within a short radius of home and can charge at home (or work, if your commute isn’t a monster), and have access to a second car for longer journeys, then even the range is fine.

The range, then, from the E’s 35.5kWh battery pack, is officially 125 miles. We got close to that in the summer, but it’s a figure that only tells half the story. On the coldest winter days, you’re likely only to manage half that distance, when you need to demist the windows, warm the cabin and make use of the heated seats and steering wheel.

For those who fit the home charging and second-car criteria, is a 125-mile range enough? Most likely, yes, but don’t rush into ownership without taking the 65-mile winter range into serious consideration. I was surprised to find that, despite its range limitations, the E managed everything I asked of it without causing range anxiety. For others, though, that winter range doesn’t half undermine the E’s overall appeal, so any final verdict comes with a significant caveat.

But caveats are fine so long as you go in with eyes wide open: the E is still a great car, just one with a great big (potential) flaw that limits any emphatic

I was captivated by the Honda E – the looks, the interior, the handling and that amazing turning circle. You look forward to offering someone new a chance to ride in it, just to demonstrate how well it turns. But range is the decider. If you need a car for local trips – a city car, as Honda labels it – there’s almost nothing to dislike, especially if home charging is the norm for you. But as your one car for all jobs? Forget it.

We’re very much still in the education phase of electric cars among the public. Many Autocar readers will know their appeal and drawbacks, likewise the early adopters and evangelists – although less of the drawbacks there…

That education must include an explanation of what a headline range figure really means. In the Honda E’s case, 125 miles is very much a best-case scenario, and one valid only for the warmest months of the year. Or warmest days, in the UK’s case.

In the summer heatwave when the E was first delivered, a range approaching 125 miles was indeed possible when I drove carefully and turned the regenerative braking to its maximum, always-on setting using the button on the centre tunnel (rather than the lighter touch given by the steering-mounted paddles).