As the Fully Charged blog has documented, the move to electric cars is well underway.

In fact, recent research from LV=General Insurance (LV= GI) found that one in three drivers are considering buying an electric car in the next five years. However, some drivers are still put off by the differences between driving electric and petrol/ diesel cars.

That’s why LV= GI is calling on the DVSA to adapt the UK driving test to meet the specific requirements of electric cars, and we’re not the only ones! Over three quarters of UK drivers agree, especially those who already own an electric car. With the government’s 2035 petrol ban fast approaching, there’s no better time to ease the transition for the next generation of drivers.

So, what would this new “green” driving test entail?
LV= GI recommends that the adapted test should address the top five differences that drivers notice when they upgrade from a petrol/diesel car to an electric one. Our research found that drivers are particularly worried about:

Getting used to the driving range
Noise difference
Getting used to a fully automated car
Difference in acceleration
Difference in braking speed
Despite the growing interest in going green, the vast majority (87%) of drivers have never been behind the wheel of an electric car, and as such are unaware of the many differences between driving and owning one. As more drivers consider making the switch, and more first-time drivers learn to drive an electric, it’s important to make sure that everyone has the right knowledge to make sure they can stay safe on the roads. 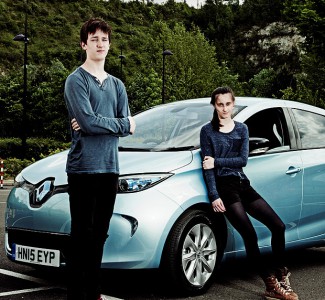 We think the practical test is the place to start!
During the practical section of traditional driving tests, the “show me, tell me” portion of the test will need to be updated. In an electric engine, the use of a battery in the car floor, and the inclusion of regenerative braking reduces the usage of brake pads and in some models means you can drive with just the accelerator. Other elements under the bonnet have changed so you’ll struggle to do a dip check since there’s no engine oil, so EVs look very different to gas and diesel cars under the hood.

The new practical test should also challenge drivers to consider their battery usage and how this may affect overall driving range and distances. It could also help users familiarise themselves with other aspects of EVs, such as modern GPS technology and charging point maps.

What can I do in the meantime?
We believe it’s imperative that the DVSA adapts the test, but in the meantime, there are some steps you can take before setting off in your new electric car.
Firstly, if you’re thinking about making the switch then ask the car dealer to take you out on a drive to help you understand the key differences. If you have a friend or family member with an EV then ask them to talk you through some of the mechanics. While it won’t replace the depth and breadth you would learn as part of a proper driving test, it should help you to feel more comfortable with the concept of an EV.

In particular, ask them to show you under the bonnet, and field your questions about the realities of having to charge your car regularly. For example, your EV may have a setting to warm up the battery before plugging it in, as this allows for a much quicker charge. You can also take an advanced driving course, which will help you feel more at ease and provide helpful tips and tricks for handling an EV.