As more governments commit to shortening the deadlines on banning the sale of internal combustion vehicles, and with more and more manufacturers launching all-electric models across all price ranges, the market seems finally to be starting to change: interest in this type of vehicle in the UK has shot up by 500%, while sales across Europe have reached half a million units so far in 2020. It is increasingly common to have friends who have bought an electric car.

Tesla is now worth $500 billion dollars, while Volkswagen, which has built the largest production plant for electric vehicles in Europe, has started selling its ID.3, which has been the best-selling electric vehicle on the continent in October. Manufacturers such as GM and BMW are scaling up their ambitions in the electric segment, while 28 companies are launching ZETA, the Zero Emissions Transportation Association, a lobby with the main objective of creating the economic, social and political environment that will allow electric vehicles to account for 100% of sales in the United States by 2030. 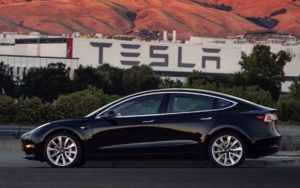 In Europe, taking into account the composition of the grid, electric vehicles are already three times cleaner than their petrol equivalents. In California, not only are they not concerned about the number of electric vehicles skyrocketing, but they are being proposed as one of the solutions to the state’s energy production infrastructure problems. In fact, several manufacturers have already abandoned Donald Trump’s initiative that sought to soften California’s tough emissions legislation: what happens in California, the most important automotive market in the United States and one of the largest in the world, usually has a great influence on the auto industry.

Japan, which has recently declared a climate emergency, has also brought forward the date for the ban on the sale of diesel and petrol vehicles to 2030. This is causing concern in Australia, which also drives on the left, but has no car industry, and fears that if it does not keep in step, it could see its market for right-hand-drive fossil fuel vehicles severely undersupplied.

There is now tremendous competition within the technologies related to electric vehicles and batteries: a new stage in which the application of continuous improvements has made this type of vehicle the logical option for the future, also linked to the development of autonomous driving.