Washington, DC (CNN)Tesla’s fortunes have made quite a journey since April 2018, when CEO Elon Musk posted a photo on Twitter of himself apparently asleep, lying on a Model 3, holding a ragged cardboard sign that read “Bankwupt!”

“There are many chapters of bankruptcy and, as critics so rightly pointed out, Tesla has them *all*” Musk tweeted, in an apparent April Fools Joke.

But at the time, Tesla’s finances were nothing to laugh about. Tesla came within about a month of bankruptcy when bringing the Model 3 to mass production, Musk said last month.

Tesla persevered through the dark stretch and begin reporting a string of profitable quarters in 2019, even ending the year with a slight profit. Tesla’s 2020 on its own has been a roller coaster. Its stock began to surge in early 2020, before plummeting to its low for the year on March 18, as the pandemic hit and the world’s economy unraveled.

On the same day that Tesla’s stock bottomed in March, Nio, a Chinese electric vehicle company, warned for the second time in three months that it was running out of cash to operate in the future. It had just lost $1.6 billion in 2019. 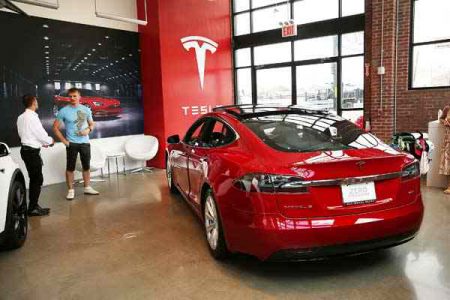 But those low moments appear to be forgotten as the stock prices of Tesla and Nio have sky-rocketed. Tesla became the world’s most valuable automaker this summer, and is now worth more than Toyota, VW, Daimler, Ford, GM and Honda combined. Tesla’s stock has surged more than 600% this year even as it sold about 1% of the vehicles those automakers sold in 2019.

And Nio’s stock rallied this summer, too. It’s grown roughly 1200% this year, and it is now worth nearly as much as General Motors.

Electric vehicle experts say that excitement and energy around the industry hit a new peak in 2020. The stock prices and fundraising fortunes of electric vehicle companies worldwide have thrived in stark contrast to businesses that have generally stumbled through 2020’s pandemic.

“People are betting that this is a new soda pop market, and Tesla represents Coca-Cola, the dominant name brand,” said Reilly Brennan, a venture capitalist at Trucks VC, which invests in transportation startups.

Some view the electric vehicle excitement as overzealous and resembling a mania, as unproven and unprofitable companies have enjoyed soaring stock prices and raised huge sums of cash.
Electric vehicle companies have raised more than $10 billion this year in fundraising rounds, initial public offerings, and special purpose acquisition companies (SPACs), which offer companies an alternative way to go public by merging with an existing company, and which some investors say is an easy way for flawed companies to go public and avoid the scrutiny of a traditional initial public offering.