Tesla hosted its Battery Day yesterday in California before a socially-distanced audience all sat in various electric cars from the company’s range and revealed its ambitious plans for more than halving the cost of battery production.

The company has plans to scale up to Terawatt-hour scale of annual production capacity for lithium batteries, which CEO and founder Elon Musk said he was confident could be done by 2030 – and possibly even earlier.

Along the way, it was also announced that Tesla intends to eliminate cobalt use in battery cathodes and reach a level of vertical integration, particularly within North America, that will see raw materials go directly from mine to production line and emerge as the finished article. No doubt many other media outlets and bloggers will focus on the transportation side of things so we have tried to hone in on the aspects of the day’s presentation most relevant to stationary energy storage. 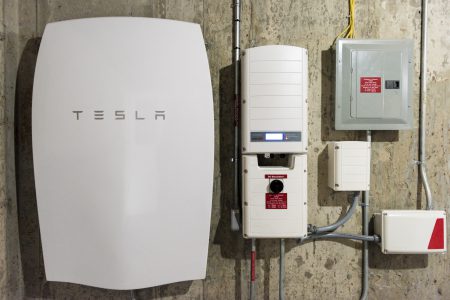 Tesla Energy’s home battery, Powerwall, is seen newly installed in the home of Steven YatesÊ in Monkton, Vermont on Monday, May 2, 2016.

Here’s how Tesla Battery Day went and what was announced:

Stockholders push back on proposed reforms
The livestream of the three-hour event began with more than half an hour of slick footage of Tesla EVs set to smooth electro, techno and house music, with some shots of Tesla solar and battery storage projects, products and of course happy workers and team members thrown in for good measure.

Then, the first part of the day’s event, the company’s annual shareholder meeting, began. Al Prescott, Tesla VP of its legal department hosted that from an outdoor stage in the California parking lot from where the livestream was broadcast.

Before the separate Battery Day event, venture capitalist Steve Jurvetson’s departure from the company’s board was officially confirmed, with Jurvetson to be replaced by Hiro Mizuno, a former head of a $1 trillion Japanese pension fund. Then, the company’s shareholders were invited to vote on seven proposals, including four from other stockholders.

Shareholders rejected all four proposals: the first for Tesla to consider running paid advertising, which it has never done, the second for introducing simple majority voting, the third on the use of mandatory arbitrations for employee disputes – including allegations of racial and gender discrimination at the company’s Gigafactory 2 in upstate New York and the Fremont assembly plant in California – and finally that the company should introduce annual human rights reporting covering its entire value chain.

Allegations on the prevalence of harassment and discrimination and a lack of recourse included “serious allegations of racism and sexism” meant Tesla should introduce a report on the impact of mandatory arbitration, Dr Kristen Hull of shareholder Nia Impact Capital, said.

Terry Collingsworth at International Rights Advocates spoke on behalf of the Sisters of Good Shepherd, New York, who asked that Tesla issue a report to describe board oversight on human rights and human rights due diligence process, including systems to provide meaningful remedies when human rights impacts occur.

Collingsworth alleged that dependence on cobalt mined from the Democratic Republic of Congo (DRC) made Tesla guilty of “not only tolerating child labour,” but also “tolerating the maiming and death of young boys” who work in some of DRC’s artisanal mines. Consumers would have “zero tolerance” of a company exposed as being indifferent to this suffering, the stockholders said. More on that later.