Renault is about to offer the Captur with its latest petrol-electric powertrain. The tech is fascinating, but business users will be just as interested in the 10% BIK rate.

The Captur is already a phenomenally successful product for Renault and it’s easy to see why. Marrying the funky visual attractions and the elevated driving position of an SUV to the easy driving manners of an agile supermini, you would be forgiven for thinking it couldn’t be any more on-trend. Well, if anything, it’s about to become even more ‘street’ as Renault launches a new plug-in hybrid Captur.

By now, most of us are familiar with plug-in hybrids and most of us understand the concept of using a combination of a petrol engine – diesel examples are increasingly rare – and an electric motor to boost a vehicle’s power output and reduce CO2 emissions. To many business users it’s an attractive solution, thanks to the claim of stellar fuel economy figures plus low CO2 outputs, which equate to reduced benefit-in-kind rates.

The Captur’s 10% BIK rating is essentially calculated on its ability to travel up to 30 miles and up to 84mph on electric propulsion alone. Although 10% may not be quite as appealing as the current 0% of pure electric vehicles, such as Renault’s own Zoe, it’s considerably less punitive than the taxation kicking dished out to diesel car drivers.

The biggest advantage plug-in hybrids have over pure electric vehicles is that they are not constrained by battery range alone, as they will continue to run on petrol power once the battery’s power is depleted.

In the Captur’s case, you charge its battery via a 7kW wall-mounted charger – there is no fast charge option – most likely overnight.

Strict adherence to this regime is key because if you forget to charge up you will cop for a double penalty, as not only will you be hauling around the deadweight of a drained battery pack, you will also be sapping energy from the petrol engine as it attempts to re-energise the battery.

Undoubtedly, the trickiest piece of the Captur’s powertrain is its clutchless automatic gearbox, which uses electric motors to synchronise gearchanges. It’s a smart solution and for the most part works pretty seamlessly. However, it is not without its quirks. 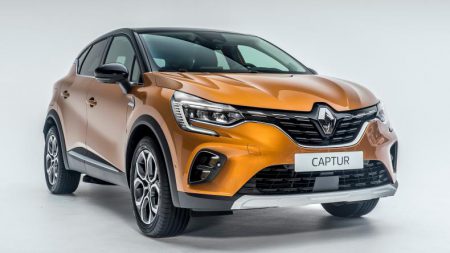 Because the battery power cannot be allowed to drop below a certain level, as it needs to retain sufficient energy to enable the starter motor to work, including its many stop-start procedures, the petrol engine will occasionally take on a mind of its own, and out of the blue send the revs soaring to generate a re-energising flow of electricity.

We experienced this on two separate occasions. Once at a standstill, when it seemed odd to hear the revs cranked well above idle but not particularly alarming, and also at crawling speeds, where the connection to the engine was seemingly lost to some form of artificial intelligence. Less intrusive are the occasional shudders that accompany some shifts and the odd time where the gears seem reluctant to downshift, leaving the engine to labour up steep inclines.

Compared to the high-tech gearbox the 1.6-litre four-cylinder petrol engine is positively old school. Eschewing a turbocharger and relying purely on fuel injection, it is designed with smoothness and quietness in mind, mainly to minimise the aural and vibration transitions between electric and petrol modes. To this end, it is highly effective, only ever sounding strained when worked excessively hard.

Like most Renaults these days the Captur focuses more on comfort than dynamics. Although there is some audible whine from the electric motor, wind, road and suspension noise are generally well suppressed, while both the steering and the brakes demonstrate a consistent, connected feel.