That’s because it is. PSA doesn’t do a special, electric-only model like the Renault Zoe or Honda e. Rather than spend a vast amount of time and money designing and building a bespoke EV platform, it engineered its so-called ‘CMP’ architecture to accept both petrol/diesel and electrified powertrains. Every car that’s based on it (the 208, 2008, DS3 Crossback, Vauxhall Corsa and soon, Vauxhall Mokka and Citroen C4) gets the option of electric propulsion.

And these cars are not for zero-emission virtue signallers. PSA’s electric cars look and feel almost exactly like their petrol-powered counterparts. That’s the point – to normalise what is for many still a scary, new technology. You just fill them with electrons instead of inflammable liquid.

Surely the electric ones are more expensive? 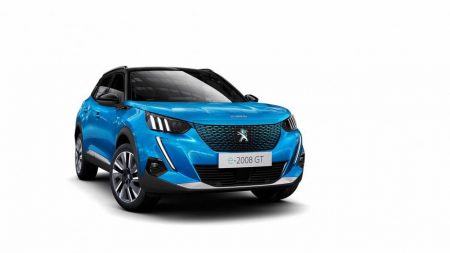 They are. The e-2008 is available in all the same trim levels as the regular 2008, with prices (including the Government’s £3,000 grant) coming in at around £5,600 more than the equivalent petrol auto if you’re buying outright.
But you’re not buying outright, are you? Lease direct from Peugeot, and you’ll pay around £60 more per month for the electric-powered car. Remember, though, that the EV is exempt from road tax and BIK (potentially saving company car drivers thousands) and a full charge should only cost a little over £7 if you do it at home, while a full tank of petrol costs £50.

Yes a tank of fuel will get you further than a fully-charged battery, but not that much further.

Far enough. Peugeot claims between 191 and 206 miles, which is a smidge less than the mechanically largely identical e-208 because of the e-2008’s increased size and weight. We think 160 miles is a fair estimate of what most people will see, but pop it into Eco mode, amp up the regen and switch off the air conditioning and obviously you’ll go further.
In a 65-mile test the e-2008 managed 3.9 miles/kWh, which is actually very good. Its range computer is annoying though. Rather than counting down progressively as you cover distance, like other EVs, it tends to stick at one reading for miles, then loses a load of range in one big lump when you gently accelerate up a slip road. This is annoying and not massively confidence-inspiring.

A three-pin plug takes 24 hours to fully charge the e-2008, so if you’re got a driveway definitely get yourself a 7kW wallbox. It does the same in less than eight hours – a good night’s sleep. Find one of the relatively few 100kWh chargers out in the wild, and your e-2008’s 50kWh battery will charge to 80 per cent of its capacity in just 30 minutes.