From the MX-30’s unique interior to its futuristic exterior, Mazda’s first entry into the EV world is definitely something different…

When I see the letters MX, I usually experience a frisson of excitement. They immediately make me think of the MX-5, hands down the greatest roadster ever made. And yes, I’m happy to argue that out with anyone. Because I’m right.

So when I saw that Mazda’s first electric car was called the MX-30, that little frisson of excitement hit me once again. Surely Mazda wouldn’t use those two letters lightly? After all, they belong to the best-selling two-seater convertible of all time. A car that is an absolute joy to drive. 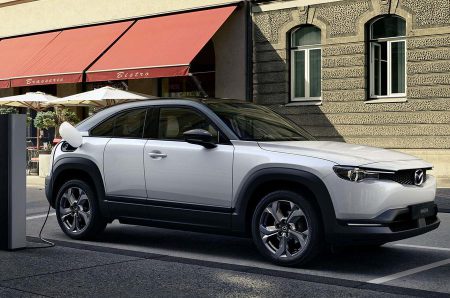 So, does the MX-30 live up to its moniker? Well, kind of. Because just as the MX-5 was revolutionary in its day, Mazda’s first electric car is doing it differently too.

There’s plenty of innovative design in Mazda’s MX-30. But there is one element that sticks in our memory: the cork interior. Rather than use the conventional plastic, metal or wood to trim parts of the dashboard, Mazda’s designers chose the material that plugs wine bottles, holds pinned notes to boards and hides damp patches in bathrooms decorated in the 1970s.

There’s some reasoning for it of course. It turns out Mazda was founded a century ago as a cork manufacturer. It developed some machines to help the processing and then somehow evolved into a carmaker. It’s a nice historical nod, but the cork’s use inside the MX-30 is also an indication that this is a company who likes to do things a little differently.

While its Japanese rivals, Toyota, Honda, Nissan and Mitsubishi, have been building hybrids and electric cars for more than a decade, Mazda has resisted the current flow. It argued that there are still ways to make the internal combustion engine more efficient, as shown by its Skyactiv petrol engines. The combination of light weight and engine technology means even a car like the MX-5 will squeeze 55 miles out of a gallon without even trying.

But now, with the forced end of internal combustion engines looming and the imposition of heavy emissions taxes, Mazda is bowing to the trend. But it’s not going to go the usual way. It wants to make its EV lighter and more efficient, while still being fun to drive. More like a BMW i3 than a Tesla. More, in fact, like the MX-5.

The MX-30, which can now be ordered at prices starting at £27,495, doesn’t have any direct rivals. The most obvious are the Mini Electric and the Honda e, both of which are thoroughly modern but have cutesy retro styling. But the MX-30 instead has a futuristic SUV-like look and pillarless doors, just like a BMW i3 or Mazda’s own deceased sports coupe, the RX-8.

They may not share an aesthetic but what the MX-30 does have in common with the Mini and Honda is a surprisingly small battery. At 35.5kWh it is noticeably smaller than rivals such as the Kia e-Niro’s 64kWh. For comparison, the newer VW ID.3 will start at 45kWh and offer up to 77kWh in the top version. And the bigger the battery, the bigger the range.