Verdict 4 stars
If you’re in the market for an urban tool with minuscule running costs, and you don’t regularly need to carry more than a couple of small passengers, then the Citigo-e iV might just be the perfect choice. We’d urge you, though, to check your own usage profile first to see not only if an EV is right for you at all but also if you’re going to need much charging beyond what you can do on your own driveway. If you’re not then the cheaper version of the Skoda, without rapid charging, looks an even more appealing proposition.

There’s no shortage of electric offerings on the way – including three plug-in city cars from across the VW Group. We’ve already tried the VW e-up!, SEAT Mii Electric and Skoda Citigo-e iV abroad, but now we’ve had a chance to drive the Czech model on British roads – in the murky chill of a UK winter – to see how it stacks up. 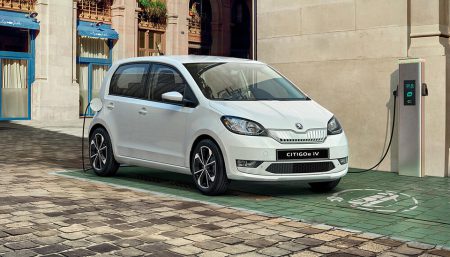 To recap, the three models are as similar in electric form as they have been for the past eight years fitted with a petrol engine. There’s a single mechanical set-up: an 82bhp electric motor with a 36.8kWh battery that can deliver around 161 miles of range on a single charge. Even the pricing isn’t too different, with spec-for-spec models all costing between £19,315 and around £20,000 after the government plug-in car grant.

However, Skoda has gone its own way by offering a second, cheaper edition of the Citigo-e iV with a few fewer toys and, significantly for some, only conventional charging instead of the rapid DC CCS configuration that’s standard on all the other models. It’ll save you almost £2,500 over the regular model that we’re testing here, and for some people, who intend to drive their car around town with only domestic plug-ins most of the time, that will make it an astonishingly effective urban option.