The electric vehicle revolution is proving to be a hugely disruptive moment in automotive manufacturing. Everyone talks about how Tesla has shifted the market, and increasingly about the new Chinese or reborn European brands coming out of China. But there is another player that appears to see EVs as a clear opportunity grab a bigger chunk of the vehicular sales pie – South Korea.

I have already discussed how Hyundai is clearly seeing a big opportunity in EVs, but Hyundai has developed the E-GMP electric platform for its Ioniq 5 in partnership with the other major South Korean car brand: Kia. The Ioniq 5 looks great, but Kia’s EV6 looks equally good or, in my opinion, even better. It is extremely easy to fall into the trap of calling every new EV a “Tesla beater” or “Tesla challenger”, but the EV6 could well have new car buyers thinking twice about their Model 3 or Y purchase.

First, let’s get the headline specifications out the way. The EV6 sits in the popular “crossover utility vehicle” (CUV) segment – which basically falls between SUVs and regular cars, riding a bit higher than the latter but with no off-roading 4×4 pretentions (in most cases). However, as CUVs go, the looks are far closer to a regular car. Where the Ioniq 5 had a vague air of the AMC Pacer about it, the EV6 is much sleeker and has even been likened to the Jaguar I-Pace, one of the best-looking EVs yet.

The most telling specifications are the performance and range. Kia is offering a plethora of powertrain configurations – rear motors with two different power levels, and three different all-wheel-drive power levels. There are 58kWh and 77.4kWh battery options. These are apportioned between three different trim levels, including the basic EV6, an EV6 GT-Line, and the top-of-the-range EV6 GT. The latter is the headline act because it will boast 430kW (577hp) dual motors and the bigger battery, which Kia claims will give it “over 510km” (319 miles) of range. 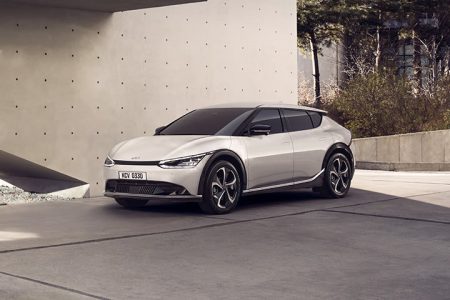 The performance figures are mouth-watering, too, with a 0-62mph sprint of 3.5 seconds and a top speed estimated to be 260km/h (163mph). A Tesla Model 3 performance is slightly quicker, but the more direct competitor will be the Tesla Model Y, which is slightly slower. The range looks even better than the Model Y Performance, too. Kia is also promising 800V charging capable of delivering 10 to 80% battery capacity in just 18 minutes, or 100km (62 miles) in less than 4.5 minutes.

Cargo space will be good as well, with 520 litres as standard and 1,300 litres with the rear seats down. This is quite a bit less than a Tesla Model Y, but quite a bit more than the Model 3. There is a small frunk at the front of the car too, and the EV6 will be rated to tow up to 1,600kg. Perhaps the most innovative practicality feature, however, is that, like the Ioniq 5, the Kia EV6 will have an external power output capable of delivering up to 3.6kW. This will mean you could easily power appliances when camping.

If you look at Tesla pricing in the UK compared to the US, it is highly likely that the EV6 will be relatively cheaper than our US dollar conversions the other side of the Atlantic. The Tesla Model Y, which is perhaps the closer competitor, is $5,000 more expensive than the Model 3, too. Although we are yet to know the full specification other than engine power and battery capacities for the models below the Kia EV6 GT, the Kia EV6 is likely to be extremely competitive on range and performance with Tesla’s Model 3 and Y.