Mirror Motoring’s Colin Goodwin says that in a torrid year for the car industry, MG was the fastest growing car brand – with spectacular sales for a good reason

Last year, as you have no doubt guessed, was a shocker for the car industry. Sales in the first lockdown were virtually non existent – and for the rest of the year dealerships struggled.

Unless, that is, they had an MG sign out front.

Why this spectacular performance?

It’s simple really: MG makes cars that are very affordable, good value and crucially, many of them are electric. Like the ZS crossover which undercuts almost all EV rivals on price.

They’re what we motoring hacks like to call ‘honest’ cars.

And now we have the latest MG model on test. It’s called simply the MG 5 SW and it has the distinction of being the only pure electric estate on sale today.

Its positives well outweigh the negatives – and price is a big positive here.

To keep costs down it’s sensible to keep your range of cars simple – and MG has done that with the 5 SW.

Not only do these prices undercut most rivals, they’re lower than those for MG’s own ZS.

This MG is no beauty – a bit like a Kia or Hyundai from a few years back. But so what? It’s hardly ugly and you’ve got to remember that price. 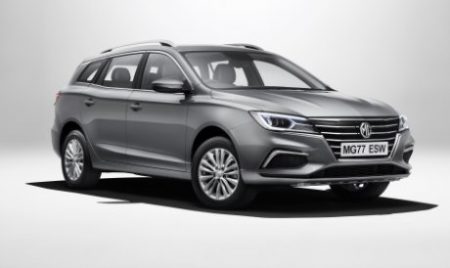 It’s a similar story inside as there is a fair bit of hard plastic about the place. But I could live with that because of the simplicity and ease of use of the controls.

I’d save two and a half grand and stick with the entry level car. Not least because the satnav isn’t brilliant and since both trim levels come with Apple Carplay and Android Auto you can use your phone for navigating.

Roof rails aren’t a good idea on an EV anyway, they add drag.

Which brings us neatly onto range. The MG 5 SW is fitted with a 154bhp electric motor that’s powered by a 52.5kWh battery of which 49kWh is usable.

Again, the MG thrashes its nearest price rivals including the ZS. The claimed WLTP range is an impressive 214 miles.

You can charge the MG using a rapid charger via a CCS-style connector at a maximum rate of 50kWh – which means you can take the battery from zero to 80% in 50 minutes. In theory.

I’m sure EV drivers will know it’s not always possible to achieve ‘book figures’ for recharging.

I used a rapid charger on this and in half an hour had only added about 20kW.