If you were put off the previous Vauxhall Mokka X by its dowdy design and fossil fuel-burning engines, the Vauxhall Mokka-e couldn’t be much more different. Vauxhall now sits alongside a host of marques including Peugeot and Citroen under the Stellantis group umbrella, so it’s time for a fresh look.

The Mokka-e is wider and lower than the old car, instantly giving it a more athletic stance. It also boasts a new family face, called ‘Vauxhall Vizor’ that will soon appear on every new model from the brand. Based on the Opel GT X Experimental concept from 2018, it has a smooth grille designed to house a myriad sensors elegantly and make the car appear wider. Both conventionally fueled and electric versions get a blank grille, so a couple of ‘e’ badges are the only giveaway that this is the EV.

While the standard Vauxhall Mokka has to fend off rivals from nearly every manufacturer, the Mokka-e has far fewer competitors, for now. The Mokka-e is mechanically identical to the Peugeot e-2008 and DS 3 Crossback E-Tense, and undercuts cars like the Hyundai Kona Electric and Kia e-Niro on price. Our favourite small SUVs, the Renault Captur and Ford Puma, don’t offer EV versions. The Mokka-e’s size and style might also lead you to cross-shop it with small electric superminis like the MINI Electric and Renault ZOE.

The Mokka-e manages a 201-mile range, and the battery can be topped up to 80% in just half an hour if you plug it in to a 100kW public charger. We’d imagine most customers would use a 7kW home wallbox more often, which takes around seven and a half hours to fully recharge the Vauxhall’s battery – meaning cheap overnight charges should be easy.

The range is about average for the class – the Mazda MX-30 and Kia Soul EV offer 124 and 280 miles respectively – and its acceleration figures don’t stand out either. Hitting 0-62mph in 8.7 seconds is relatively brisk, just not as impressive as some electric rivals. This, however, is a deliberate tactic on Vauxhall’s part as engineers have set up the throttle response to feel less urgent and more like that of a petrol or diesel car. It means that the Mokka-e might be appealing if you don’t enjoy being pinned back in your seat every time you pull away from the traffic lights.

The interior is all-new, and is what you can expect from the next generation of Vauxhall models. A configurable digital instrument cluster is standard on all but the base model, and it’s joined by a touchscreen that can measure up to 10 inches. Smartphone connectivity is present and correct, while material quality is good in most places – there are soft-touch plastics in areas you’re likely to touch. The car is quite small inside, though, offering more interior and boot space than a supermini but less than many small SUV rivals. 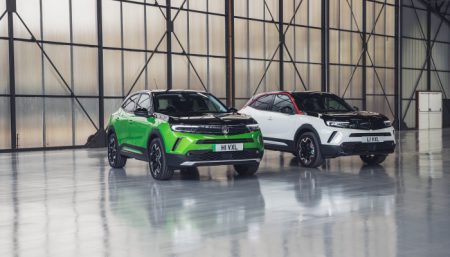 The Vauxhall Mokka-e doesn’t have a single standout reason why you’d buy one over a Peugeot e-2008, Kia e-Niro or MG ZS EV. But it doesn’t have anything glaringly wrong with it, either. Sitting it right in the middle of the pack with few faults and an attractive design is probably a recipe for strong sales.

Thanks to its shared CMP (Common Modular Platform) with the Vauxhall Corsa-e and Peugeot e-208, the Mokka-e gets the same 50kWh battery. This gives it a range of up to 201 miles in ideal conditions, making it competitive with models like the Peugeot e-2008. However, the Mokka-e doesn’t quite boast the range of the 64kWh Kia e-Niro, which is capable of around 280 miles from a single charge.

An onboard 11kW charger and mode 3 cable allows the Mokka-e to be fully charged in just over 7.5 hours using a home wallbox, or, if you can find a public 100kW rapid charger it can be topped-up from 15 to 80% in around 30 minutes. While 100kW chargers are still fairly rare in the UK, the charging infrastructure is growing rapidly thanks to government funding and investment from private firms like Instavolt, Shell Recharge and BP Pulse.

The charging flap is to the rear of the passenger side c-pillar, rather like a conventional petrol fuel filler cap. It has a series of LED lights that light up to help illuminate the charging port and indicate progress. Flashing green shows charging is in progress, while a solid green light shows the battery is fully charged. A blue light shows charging has been scheduled for later, while red indicates a fault.

The Mokka-e is the best in the range for company-car drivers, as it’ll cost very little in Benefit-in-Kind tax. Meanwhile, the three-year/60,000-mile warranty is similar to rival models, although the battery pack is covered for eight years or 100,000 miles. Vauxhall offers a three-year servicing package – but that may only cover two services as the Mokka-e needs an initial inspection after 8,000 miles or a year, and then needs servicing every 16,000 miles or two years thereafter. Another Mokka-e perk seems to be complimentary roadside assistance for eight years, which could add up to quite a saving.