The third-generation Fiat 500 city car has arrived, more than half-a-century and six million sales after Italy’s favourite small car first launched. It marks a historic turning point too – this 500 is all-electric, which should be no surprise given the Fiat’s trendsetting past.

For the time being, Fiat will also continue to sell the mild-hybrid petrol ‘old’ 500 for customers who want a cheaper small car, but the ‘new’ 500 will come with just one zero-emissions powertrain. The la Prima special edition is the only one available from launch and costs a rather significant £26,995 including the government Plug-in Car Grant (PiCG) and a home wallbox charger. That’s a lot for a Fiat 500, and puts the car close on price to the upmarket MINI Electric and Honda e. 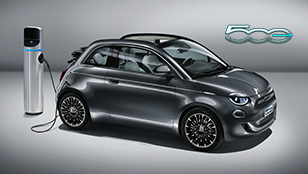 Like other electric cars, if you can stomach the high price – or more likely find an affordable finance deal – the running costs start to pay dividends immediately. Tax is free, company-car drivers have much smaller bills and recharging the battery pack costs under £10. The 500’s large 42kWh also gives it an edge over the MINI and Honda, with a range of 199 miles – just over 50 more than those two. The Renault ZOE can go even further, however, with a range of almost 250 miles.

With 117bhp and instant pulling power, the 500 feels effortlessly quick around town, getting up to speed in next to no time. It also boasts a sharp turning circle and its ride can even soak up potholes, making it an ideal urban runaround. Its range and up to 85kW fast charging should also make longer trips relatively straightforward.

Fiat has been careful to preserve the 500’s unmistakable design, despite the car growing in every direction. Perhaps most impressively, the addition of a large battery pack hasn’t made the cute Fiat look too tall – it’s only gained 26mm in height. Meanwhile, features like split LED headlights that the bonnet intersects lend a modern look, and the lack of a grille points to the past, when the engine was mounted in the back.

Clean lines extend to the interior, where there’s now less clutter and a wider fascia. There’s also a far more powerful infotainment system, thanks to the arrival of U Connect 5, with a digital instrument display and high-definition 10.25-inch touchscreen. Occupants will enjoy more space and there’s a better driving position, but the boot remains compact at 185 litres.