It will be used by the Tokyo Fire Department

Consumer passenger cars aren’t the only vehicles undergoing electric transformations. We’ve seen the introduction of early electric fire trucks, and now Japan is getting its first electric ambulance. It’s a Nissan NV400, and it will be used by the Tokyo Fire Department at the Ikebukuro station. 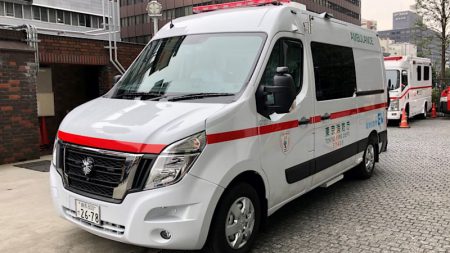 Though badged as a Nissan, the NV400 is at its heart a Renault Master Z.E. electric van. The powertrain is the same as the French van with a 33-kilowatt-hour battery (7 kWhs less than the base Nissan Leaf) and a 55-kW motor driving the front wheels. That translates to 74 horsepower and 162 pound-feet of torque. That doesn’t sound like much, but in as dense a city as Tokyo, it’s not likely the NV400 will be able to reach high speeds at all, even if it had a Hellcat engine.

There are a couple of unique additions to the van to enhance its ambulance capability. One is the inclusion of a separate 8-kWh lithium-ion battery that can operate all the equipment on board for long periods of time without eating into the ambulance’s range. It can even be used like a generator to provide power to external emergency equipment. Then there’s the stretcher, which Nissan vaguely says is electrified to make it easier to use by the medical personnel. We presume the stretcher has an electric motor to make it easier to push around.