The Skoda Citigo-e iV electric city car will start at £16,955 when orders open next month – undercutting rivals like the SEAT Mii Electric and Renault Zoe.

Based on the petrol Citigo, Skoda says the Citigo-e iV has been re-engineered to incorporate a compact battery pack and 61kW electric motor, giving it a WLTP electric range of up to 170 miles on a single charge.

Buyers will be able to choose from two trim levels: SE and SE L. Both models will have the same battery and electric motor, while the Citigo-e iV has the same luggage capacity as the standard car. That means 250 litres can be stored in the boot, increasing to 923 litres with them dropped flat. 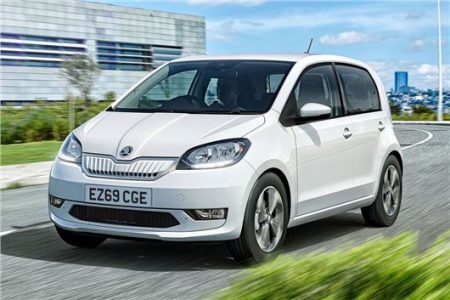 Mounted in the chassis floor, the Citigo-e iV’s compact battery has a capacity of 36.8kWh. It consists of a total of 168 cells and delivers a range of between 140 and 170 miles on the WLTP cycle. Both models can be charged using a domestic or workplace wall box.

With a 7.2kW AC wall box, the battery can be charged to 80 per cent in 4 hours 15 minutes, or 12 hours 37 minutes using a lower-powered 3.6kW home‑charging station. The SE L model can be charged faster using a CCS (Combined Charging System) charging cable connected to a 40kW DC fast charger.

Citigo-e iV’s electric motor produces an instantaneous 210Nm of torque, taking it to 62mph in 12.5 seconds, while top speed is 81mph.