SWARCO eVolt, the award-winning Electric Vehicle (EV) Charging business, has reported a record year in which it has continued to innovate, deliver the highest levels of customer satisfaction, and increase its market share through the strength and reliability of its technology and engineering teams.

The company, which began installing its first charging points more than eight years ago, has now grown to become one of the largest providers of single, dual and multiple commercial charging points across the UK.

It currently has more than 6,250 of its eVolt-branded charging points installed throughout the country, in addition to a further 343 Rapid Charging stations to meet the needs of an expanding customer base that includes more than 88 Local Authorities and a large number of private businesses. It also launched SWARCO E.Connect, a highly sophisticated EV recharging network for eVolt and third party-manufactured charging stations across the UK and Europe. 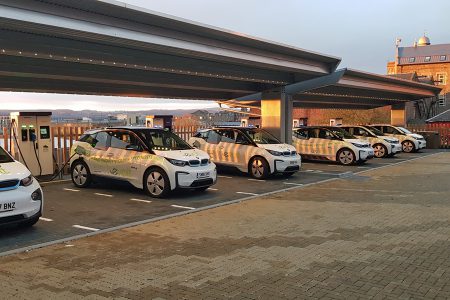 It ended 2018 with news of a major new contract to deploy several hundred of its DC Rapid Charging stations for Engenie over the next 12-18 months, as well as being named Charging and Refuelling Infrastructure Provider of the Year at the 2018 Green Fleet Awards.

It has also announced plans to recruit a further nine front-line engineers and call centre staff, a new Head of Sales, Anne Buckingham, the former Head of Electromobility at Siemens, and launch new 100KW and 150KW versions of its proven Raption Rapid Charger.

Justin Meyer, General Manager at SWARCO eVolt, says the key to its success has been the reliability of its products: “In 2018 we recorded a network uptime of 99.38% which is exceptional,” he says, “and of course leads to exceptionally high levels of customer satisfaction. Our investment in EVs for our service engineers also contributes to the highest level of first-time fixes for any issues that do occur.”

Justin believes the company’s growth and increased market share also reflect the growing popularity of EVs, as more local authorities and private businesses look to meet their ‘green’ responsibilities and realise the benefits that EVs can deliver. Fleets of electric buses, taxis and council vehicles are all increasing, leading to an increased demand for charging points, and the opening of the first ever EV Rapid Charging ‘hub’ in Scotland. Two more ‘hubs’ have been installed by SWARCO eVolt since.

“We have an established reputation as the ‘go to’ supplier for commercial EV charging infrastructure solutions, respected for the range and reliability of our systems and a strong support network right across the country,” Justin continues. “But we realise that to stay on top we need to continue to innovate.

“To that end we will be launching a series of new e-mobility products and services in 2019, with a particular focus on further integration with intelligent traffic technologies inherent within the SWARCO Group.”