Fleets and company car drivers will benefit from competition on pricing for electric vehicle charging at motorway services after exclusive agreements were ruled out as part of Competition and Markets Authority (CMA) investigation.

Gridserve, which acquired the Electric Highway from Ecotricity in June, has offered legally-binding assurances, known as commitments, to the CMA.

It says that it will not enforce exclusive rights in contracts with Extra, MOTO or Roadchef, after 2026, which currently cover around two-thirds of motorway service stations.

In doing so, Gridserve has committed to reducing the length of the exclusive rights in the current contracts with MOTO by around two years and Roadchef by around four years (the contract with the third operator, Extra, is due to end in 2026). 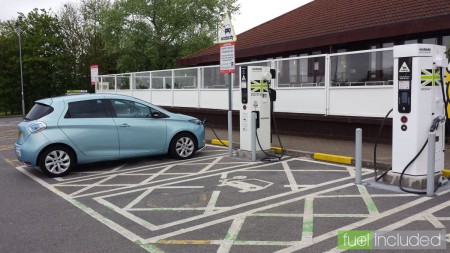 Furthermore it says it will not enforce exclusive rights at any Extra, MOTO or Roadchef sites that have been granted funding under the UK government’s Rapid Charging Fund (RCF).

This means that, where funding has been granted, competitor charge point operators will be able to install charge points regardless of the exclusive element of the Electric Highway’s contracts.

Each of the motorway service station operators – Extra, MOTO and Roadchef – and Gridserve have also offered commitments not to take any action that would undermine the above commitments.

Andrea Coscelli, CMA chief executive, said: “One of the biggest stumbling blocks to getting people to switch to electric cars is the fear that they won’t be able to travel from A to B without running out of charge.

“Millions of people make a pitstop for fuel at motorway service stations every day, so it’s crucial that people can trust that electric charge points will do the same job.

“Healthy competition is key to ensuring that drivers have a greater choice of charge points where they need them, and for a fair price.”