Does a 30-mile all-electric range make this compact SUV a more attractive option?

Renault isn’t shy about its role in the growing electrification of the motor industry.

In fact, it’s downright boastful about being one of the first major manufacturers to offer a fully electric car in the shape of the Zoe, which it launched in 2010. A decade later the Zoe is still going strong but the world hasn’t fully embraced EVs so car makers are looking at other ways to ease buyers into an electric future.

One such obvious method is hybrid models, which get drivers used to electric power but also, coincidentally, help manufacturers cut their fleet CO2 emissions at a time when serious new fines are on their way.

Which leads us to the Renault Captur E-TECH plug-in hybrid.

The Captur is one of three new hybrid variants launched at the same time by the French firm, sitting alongside a Clio “regular” hybrid and the Megane plug-in hybrid. 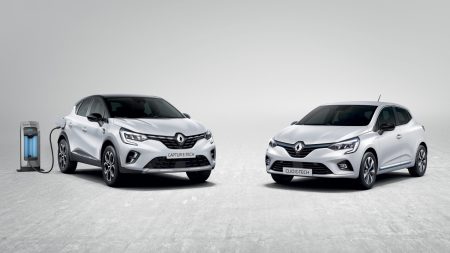 From the outside, the only obvious difference between this plug-in version of the compact SUV and a regular petrol Captur is the additional filler cover for the charging socket. Besides that, a couple of subtle E-TECH badges are the only indicators that this is a three-motor motor.

Yep, you read that right – three motors. The Captur hybrid uses a non-turbocharged 1.6-litre petrol engine as its main source of power, matched to a 49kW electric motor for a total of 158bhp. There’s also an integrated starter/generator like you’d find in a mild hybrid, which handles the start-up element and a small portion of the energy recovery that charges the battery. It’s all tied together with a clever clutchless transmission derived from Renault’s F1 technology.

It sounds complicated but in operation you’ll probably never worry about it. Everything runs together smoothly (most of the time) and the hybrid system generally takes care of switching between all-electric, all-petrol or a combination of the two, feeding energy from the engine or braking back to the battery as conditions allow. If you want to lock the car into electric-only mode, for example when in town, there’s a dashboard button for that. And, similarly, if you want to store battery power for a later time, there’s a battery save function.

The only problem with the hybrid system is a brief but distinct pause before the petrol engine kicks in if you accelerate hard in EV mode, for example when leaving a town for a national speed limit stretch. Around town, however, the Captur feels responsive as the electric motors give instant urgency for nipping through traffic. And once everything’s running harmoniously, the Captur is quick enough, with power to reach up to 83mph in all-electric mode.

In official testing, the Captur managed an all-electric range of 30 miles and fuel economy of 188mpg. On our test route, which took in a mix of A-road and urban driving, we saw an eye-opening 117mpg thanks to a fully charged battery and some useful energy recuperation.

Charging is taken care of via a 3.6kW on-board charger. This limits the charge speed but Renault says rapid charging isn’t necessary with a relatively small battery. Renault wants owners to use the Captur hybrid as an EV first and foremost so it will kindly fit a free home charging wallbox for buyers, allowing a full charge in between three and four hours.