With a 10-point plan for a “green industrial revolution” announced, Boris Johnson has announced that sales of new petrol and diesel cars and vans will be phased out by 2030.

It aims to accelerate the transition to electric vehicles to cut climate emissions and local air pollution, as part of the 10-point plan.

The plan aims to boost green jobs and drive the shift towards cutting emissions to net zero by 2050, the prime minister says, but what will it mean for motorists and how are electric vehicles different? ITV News has found out.

How do electric cars work?

Pure electric cars are powered by an electric motor using energy stored in batteries, and do not produce emissions from the tailpipe.

How are they charged?

You simply plug the vehicle into a source of electricity, the battery charges up and you’re good to go, according to Erin Baker, Editorial Director at Auto Trader.
She told ITV News: “While you can charge an electric car from a regular three-pin domestic plug socket it’s not really recommended, from either safety or convenience perspectives.
“Safety because electric cars draw a lot of current and can overload regular cables and it’s not really sensible to have long extension leads trailing across the pavement or your driveway. And convenience because it will take you a really, really long time to fully charge a modern electric vehicle (or EV) on a domestic supply.” 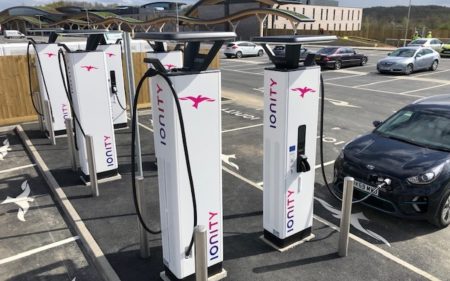 How long does it take?

According to the AA, it depends on what kind of charger you are using. A rapid charger can give you 80% range within half an hour, whereas a slow charge – which is the kind you’d get at home – will be eight hours for 80% range.
Charging power is usually measured in kW and EV batteries in kW hours, or kWh.
Ms Baker said: “You can do the basic maths – a 20kWh battery would take around four hours to charge with a 5kW supply, two hours on 10kW and so on – and most EVs use batteries ranging from 30kWh all the way to 100kWh.”

How far will a full charged electric vehicle take you?

This will vary on a number of factors, and from car to car, according to AutoTrader.
A small battery makes a car a lot cheaper but will mean less range, a bigger battery can mean more range, more performance, or both.
Ms Baker said: “While some claim a range in excess of 350 miles, at the moment, the average single-charge range is around 180-200 miles. But they are improving with every new EV rolling off the factory floor so expect this to improve within the next 12-24 months.
“Manufacturers will publish an officially calculated range for comparison purposes but small electric cars like the Mini Electric or Honda e may do little more than 100 miles on a full charge in real-world driving, while battery powered versions of popular superminis like the Vauxhall Corsa may achieve double that.
“Premium models like Teslas use bigger batteries and may, meanwhile, be capable of 300 miles or more on a charge.”

How much do they cost to run? Do they save money in comparison to petrol or diesel cars?

Currently, the government offers a £3,000 grant for buying an EV – but even with this incentive, the cost is higher than a petrol car.
Jack Cousens , head of roads policy at The AA, said: “An entry level Ford Focus is around £21,000, whereas the entry level Nissan Leaf is around £26,500 with the grant already applied.
“However, once you get past that hurdle, EVs are cheaper to run and maintain.
“A petrol car costs £50 a tank whereas it could cost you around £5 to charge an EV at home.
“EV’s also pay no VED (Vehicle Excise Duty), but a new petrol/diesel car currently pays £150 a year.”
AutoTrader recommend shopping around and being smart about how and when you charge up at home.
“Charging in public can be a lot more expensive and you pay a premium for the convenience of using fast chargers,” Ms Baker said, “but it will likely still cost less than petrol or diesel on a pence per mile basis and, for most EV drivers, this will be the exception rather than the rule.”
“They are still more expensive – not least because most are bought new at present – but this is changing fast,” according to Erik Fairbairn, Founder & CEO, Pod Point.
He added: “EVs are likely to be cheaper to manufacture than equivalent petrol cars by the mid 2020s, due to rapidly falling battery manufacturing costs.”