Cheap gas will kill sales of hybrids and electrical vehicles conventional wisdom holds, but a closer look at the numbers through November shows a more complex picture.

Somewhat surprisingly, hybrids that still use gas, but don’t need recharging, took the biggest hit. Through 2014’s first 11 months, gas-electric hybrid sales fell 9% to 418,850, according to hybridcars.com, slipping to 2.8% of the total U.S. light-vehicle market from 3.2% a year earlier.

Plug-in hybrids and pure battery-driven models actually had a strong year. Sales of plug-in hybrids jumped 17% to 51,490 and sales of battery electrics rose 31% to 55,906, of which the Nissan Leaf accounted for nearly half (27,098). Leaf sales were not only up 35% for the first 11 months, they were up 34% in November when gas prices were well into their decline. 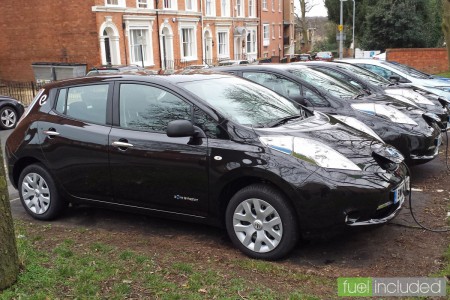 But alternative propulsion represents a sliver of our automotive landscape. The internal combustion engine, even if the current glut of crude oil vanishes by March, will be the dominant powertrain for years to come.

The Obama administration’s goal of 1 million battery-only and plug-in electric vehicles on U.S. roads by 2015 will not be achieved.

So this may not be the best time to buy your first shares of Tesla Motors, although they have fallen about 25% from an early September peak of $286.

General Motors is to unveil an upgraded Chevrolet Volt at the North American International Auto Show this month into a headwind of the lowest gas prices since the bad old days of late 2008.

But there are still folks out there for whom saving a few hundred dollars a year is not enough. They’re looking to kick the fossil fuel habit altogether and there are more choices for them.

The less consumers pay at the pump the more likely they are to opt for size and power over fuel economy. Sales of pickups, SUVs and vans outnumbered passenger cars again by 52% to 48% through November. December sales, which automakers will release Monday, likely will show that trend will grow stronger.

Most every new model, regardless of its size, offers significantly better mileage than the one it replaces because of a combination of reduced weight and more-efficient engines.

Even so, the average fuel economy of vehicles sold in the U.S., which had risen 26% over the past seven years, fell to 25.3 m.p.g. for November from 25.8 in August, according to data compiled by the University of Michigan’s Transportation Research Institute.

So the longer gas prices stay low the more difficult it could be for automakers to meet the federal government’s fuel economy standards.

But the law called for a “midterm review” before the 2017 model year to determine whether to ease the standards based on consumer habits, gasoline prices and other factors.

Don’t be surprised if automakers start suggesting soon that such a review be in the direction of a less-ambitious standard.