Citroen has announced the ultra-compact Ami will be making its way to British shores, and despite its clown-car proportions, we should take its arrival seriously

It’s very easy to think of the Citroen Ami as yet another comedy electric car – on the same plane as the infamous G-Wiz or the (doorless as standard) Renault Twizy. Hell, with a range of 46 miles and 8bhp on tap, combined with plastic bodywork and a squared-off designed that makes the Ami resemble a heavily compacted Portaloo, you’d be forgiven for questioning why 12,000 people in the UK – actively, in sound mind and body – registered their interest for what looks like an electrified pet carrier. I’m fairly sure if I parked one outside my house on bin day, it would be mistakenly recycled by the council.

Electric cars in 2021 are capable of some stupendous feats, from the Lucid Air’s 500 miles on a charge to the Hyundai Ioniq 5 – an ordinary electric family car – recharging at the same speed as the circa-£100,000 Porsche Taycan. We’ve come a very long way since the G-Wiz arrived in 2001, so is the Citroen Ami actually a huge step backwards? Another round of ammunition for sceptics looking to hold back the serious and rapid adoption of electric cars ahead of the 2030 ban on the sale of new petrol and diesel models?

Perhaps not: in fact, there’s a very strong case to be made for this bizarre micro-EV. Not in terms of driving pleasure, comfort, practicality or even usability – as our full review of the Ami establishes. 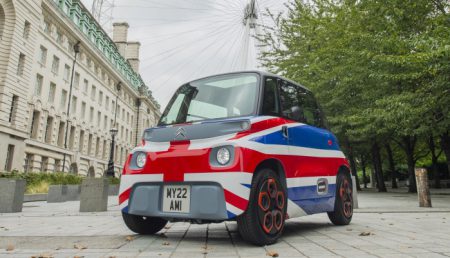 But instead, as Eurig Druce, Citroen UK’s managing director and one of the people who pushed for the electric quadricycle to be sold in the UK, has said: “I would love to see collections of Amis on street corners, where it could become the norm not to get an Uber, but to get an Ami.”

It’s when you consider the Ami like this – as an alternative to the ranks of bikes and e-scooters you can now rent for a short time in cities like London, rather than as rival to ‘proper’ cars – that you begin to understand why people are so enthralled by the French brand’s little bundle of joy. And this isn’t just a theoretical notion: you can currently rent an Ami from as little as 26 cents (22 pence) per minute on Citroen’s ‘Free2Move’ initiative, which is up and running in France.

I’d certainly rather arrive at the office or to meet up with friends relatively fresh after a drive in an Ami, rather than sweating and panting like a St Bernard after a stressful stint on a Boris Bike. And for all my criticism of its proportions and design, I can’t argue that climbing out of an Ami makes you look as suave as 007 in comparison to making an entrance on an e-scooter.