Rachel Maclean, Minister for the Future of Transport and Decarbonisation, has dropped a fresh hint that the Government intents to scrap grants to help drivers buy expensive electric vehicles.

With the ban on sales of new petrol and diesel cars just eight-and-a-half years away, driver purchases are soon to be limited to battery-powered models only.

The high price of electric models remains one of the key stumbling blocks preventing motorists buying them in larger numbers today.

However, despite this, the Government in March slashed the Plug-in Car Grant, reducing both the subsidy amount by £500 to £2,500 and eligibility for only models priced up to £35,000 when it had previous been available for those up to £50,000.

In a recent interview with Autocar, Mclean defended the decision to reduce the grant – and said its availability would be kept under under review.

The grant was first launched in 2011 and offered up to £5,000 off the price of new plug-in vehicles.

In the prevailing decade, the grant amount and qualifying vehicle types has been frequently adjusted, with the latest changes coming just months ago.

The move was lambasted by industry insiders and vehicle manufacturers at the time, with Mike Hawes, chief executive at the Society of Motor Manufacturers and Traders, described the decision as the ‘wrong move at the wrong time’.

He said the government had risked putting the UK ‘even further behind other markets’ in terms of vehicle supply and said it sent the ‘wrong message’ to consumers’ who might have been considering buying a greener vehicle.

Ford of Britain chairman, Graham Hoare, said it was a ‘disappointing’ step that was ‘not conducive to supporting the zero emissions future we all desire’ while RAC head of roads policy Nicholas Lyes criticised MPs for making a decision that risked ‘people holding onto their older, more polluting vehicles for longer’. 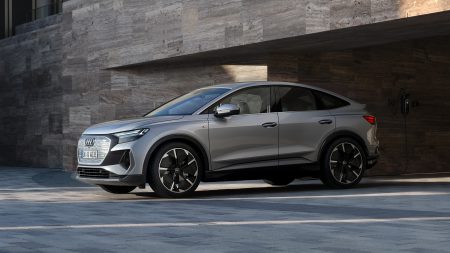 However, Maclean, speaking exclusively to Autocar magazine, defended the actions.

She said it was right for the Government to target grants only towards lower-priced electric vehicles because ‘that’s where people are less likely to be able to fund the cost out of their own pocket entirely’.

The move means that not a single Tesla vehicle qualifies for the scheme, nor does Ford’s new Mustang Mach-e, which is priced from £40,270 in the UK.

In fact, fewer than 30 electric cars on sale today now qualify for the scheme – you can find out which ones are eligible in our full report.

In the interview, Maclean also hinted that the days of the grant could be numbered, with the prospect of the incentive being scrapped completely.

The Government’s Road to Zero strategy in 2018 first stated that as the market became ‘better established and more competitive, the need for direct government financial support will decrease’.

It added: ‘We therefore expect to deliver a managed exit from the grant in due course and to continue to support the uptake of ultra low emission vehicles through other measures.’

Maclean – who owns an electric Jaguar i-Pace, which costs £65,000 and has never been eligible for the plug-in car grant – reiterated that statement to Autocar, saying: ‘I think it’s right to keep on looking at that [the future of the scheme], because ultimately we need to make sure we’re not using government money to help people buy cars who could have afforded them anyway.

‘One of our concerns is to make this an equitable transition for everyone, and of course at the moment electric cars are a bit more expensive – although if you factor in the overall cost of ownership, they will be on a parity soon.’

The Department for Transport referred us to their plug-in car grant delivery plan when we approached the government agency for comment.

The plan says: ‘We have been clear since 2018 that we intend to reduce the plug-in car grant over time.’

It adds a final commitment statement, saying: ‘We will continue to fund the plug-in car grant until at least 2022/23.’

‘The truth about hydrogen is that it’s very expensive to produce,’ the transport minister explained.

She added that the government will produce a hydrogen strategy very soon, but suggested it would be for decarbonising other vehicle types, including heavy goods vehicles, planes and ships.

Maclean added that synthetic fuels, like Porsche’s e-Fuel currently being developed in Chile, will also have ‘a role to play’ in driving down emissions, but explained it would more likely be used for the aviation and maritime industry.