MG may not be the iconic British sports car maker that it once was, but it’s thriving as a bargain brand under Chinese ownership.

In September 2021 MG Motor UK achieved its highest ever monthly sales in the UK, passing 5,000 registrations for the first time ever with sales up 61.2% year-on-year.

Much of the success was driven by MG’s pure electric models, the ZS EV and MG5 EV. And even though it was only launched in late 2020, the MG5 was the seventh best-selling pure EV in the UK in September.

As an all-electric estate, the MG5 currently occupies a unique niche in the zero emissions market.

It may not be the most handsome load-lugger on the market, but just like its crossover-styled sibling, the ZS, it’s a spacious, seriously affordable family car. 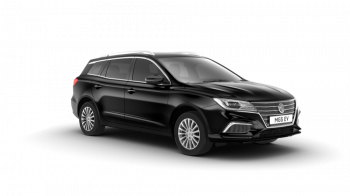 So, while the MG5 isn’t nudging the 300-mile range mark, it’s way ahead of many similarly priced cars, some of which are unable to reach 150 miles on a single charge (eg MINI Electric, Honda E and Mazda MX-30).

The MG5 sits much lower than most EVs, with the water-cooled battery pack integrated into the car’s chassis, giving it a surprisingly sleek profile..

Some may find it slightly more nondescript from the front, but plenty of buyers have no problem with it judging by the amount I’ve seen on the roads in and around London.

It’s perfectly acceptable inside too, if slightly dated, but there’s no debate over the space on offer. The large boot, accessed via a wide tailgate opening, delivers 464 litres of capacity with the rear seats up and load cover in place, expanding to an impressive 578 litres with the load cover retracted. Fold the 60:40 rear seat and the load capacity increases to a mighty 1,456 litres.