GRIDSERVE has taken a 25% stake in Ecotricity’s Electric Highway network of electric vehicle (EV) chargers, with plans to replace the current infrastructure.

Firstly, all existing Electric Highway chargers are to be replaced by GRIDSERVE, offering all three connection types – CCS, CHAdeMO and AC – and doubling the capacity, according to the company. Contactless payment will also be available on all of the new chargers, with this work already underway.

Secondly, six to twelve 350kW chargers will also be installed.

The two companies pointed to how the Electric Highway launched a decade ago in 2011 when “7kW was considered fast”, with Dale Vince, founder of Ecotricity, lauding the network as having “kickstarted” the electric car revolution.

However, in the decade since 50kW, 150kW and now 350kW chargers have become more common, leading to the Electric Highway being ranked the worst public charging network in a survey of Zap-Map users, with common complaints including that the chargers are old, poorly maintained and frequently out of service. 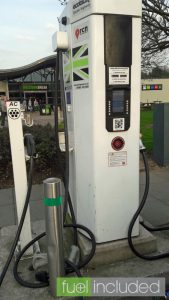 Now, in addition to the work to replace the chargers, GRIDSERVE is also to bring its front and back-office technology to the network, which is to have 24×7 support.

It comes after BP Pulse this week announced it has made £2 million available for what it described as “radical improvement” in the reliability of older UK EV charging infrastructure, having already agreed £400,000 in infrastructure investment to replace more than 50 legacy chargepoints.

Toddington Harper, CEO of GRIDSERVE, said it is a “huge privilege for myself and GRIDSERVE to take a role alongside Ecotricity in the next evolution of the Electric Highway”, adding that this new phase will “provide the confidence people need to immediately make the transition to a net zero, electric vehicle future”.

Financing for the works is being provided by Hitachi Capital UK, which is also a shareholder in GRIDSERVE. It has funded over £24 million in GRIDSERVE projects such as its Braintree Forecourt in 2020, and made an additional £10 million investment announced in January 2021.

GRIDSERVE is intending to open 100 Electric Forecourts as part of a £1 billion programme, with the Braintree site the first of these. It opened in December, allowing 36 EVs to be charged simultaneously using 350kW chargers.