If the e-Niro is to be thought of as Kia’s ‘normal’ electric vehicle, you get the sense the Korean firm might want you to think of the new Soul EV as its cool older cousin. You know, the one who vapes and listens to bands you’ve never heard of. 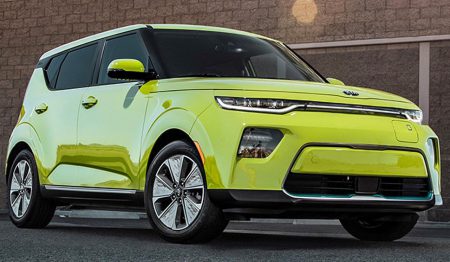 Its looks are key to that. The third-generation Soul retains the unabashedly boxy profile and boosted ride height of its predecessors. To this tester’s eyes, it’s not quite as energetically styled as it once was; perhaps that’s got something to do with the sort of sleepy look the new headlight design lends the front end. Nevertheless, it’s quite appealing; there’s still a healthy amount of quirk appeal about the design, which is an increasingly rare phenomenon.

In Europe, Kia will be selling the Soul only as a battery electric vehicle (BEV), while petrol models will still make their way to the US. Here in the UK, the decked-out First Edition model, which costs £33,795 post-Government grant, is for now the sole offering (sorry).

Despite the initial lack of choice, however, Kia UK seems pretty confident in the Soul EV’s potential. It already has some 2000 units on order, along with 8000 e-Niros. Given that just under 38,000 BEVs were sold here throughout the entirety of last year, it looks like Kia is gearing up to claim a fairly sizable chunk of the market for itself between now and December.