With a claimed economy figure of over 200mpg, the new plug-in Mercedes A 250 e is arguably the pick of the range

Verdict 4.5 Stars
The new Mercedes A 250 e isn’t perfect; the ride is a little firm and the petrol engine isn’t particularly smooth. But none of that will matter when you look at the numbers, which are sure to entice a throng of junior execs into this stylish and desirable plug-in hybrid. It offers a usable range, a quiet and refined electric powertrain, and huge fuel and tax savings to boot. Ignoring the fact it currently has no direct rivals, this is the most convincing A-Class to date.

It’d be somewhat crass to suggest the only reason Mercedes has added a trio of plug-in hybrid versions to its small car range is to help it meet upcoming and ever-stringent emissions legislation. 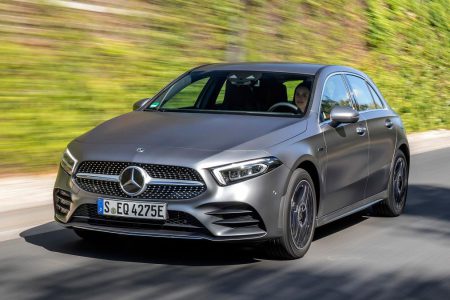 Yet mass-market cars like the new A-Class PHEV will significantly reduce the company’s overall CO2 rating, allowing it to avoid some fairly significant fines. Cars like these also have the potential to usher sizeable tax benefits to those considering buying one when order books open next month.

No other car in this class – aside from the now defunct Volkswagen Golf GTE – offers a useable all-electric range, let alone one of more than 40 miles on a single charge. BMW will add a PHEV version to the new 1 Series range in the near future, but we’ll have to wait a while until Audi offers its latest A3 executive hatch with a plug.